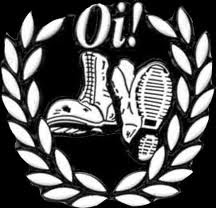 We stand for punk as bootboy music. Oi! is working class, and if you’re not working class you’ll get a kick in the bollocks. – Stinky Turner, 1980.


Loud, raw and violent, Oi-Oi is the musical battle cry of the skinheads, and like them it pulls no punches. News Of The World, 1981.

Punk Rock a la 1976 was a middle class movement that had more to do with art colleges and fashion designers than working class youth.
The original guttersnipe sneers of The Sex Pistols in the UK and the dumbed down cartoon personae of the glue sniffin' Ramones in the states were carefully crafted rather than being a spontaneous reaction to their situation. The Pistols might have been ordinary estate kids, but the band was all about McLaren.
And of course, punk appealed to the ordinary kids- with bands who swore on TV and caused spluttering outrage amongst the elders. Anarchy and chaos were quite appealing propositions to the boot-boys of the 70's, and Jimmy Pursey's Sham 69 introduced the populist terrace mentality to punk, engaging Skinheads in the punk scene.
The way in which punk diversified from 1977 onwards is very telling. Many of the original bands either disappeared or came clean about their more 'serious' musical aspirations. We got the earnest 'post punk' of bands like Joy Division and Gang of Four. The DIY punk ethos gave us Scritti Polliti as well as Crass.
On the other hand the myth of punk as the music of the streets, the highrise and the disaffected youth became a reality in the hands of groups who actually were made up of dead end kids with knocked off instruments and three chords.
I've slagged Garry Bushell off before, and I can't take to the bloke- he's a gutter patriot, but he does provide us with a comprehensive if rather apologist (it was the other side wot started it) history of Oi!

By 1983 the chances were that if you saw a young Skinhead he would be listening to fast three chord punk, not reggae or ska, and that the image would be less 'clean' than that favoured by his forebears. The original skins had placed great emphasis on the need for smartness and sharpness, but now came the tattered jeans patched with beer towels, the totally shaved heads. 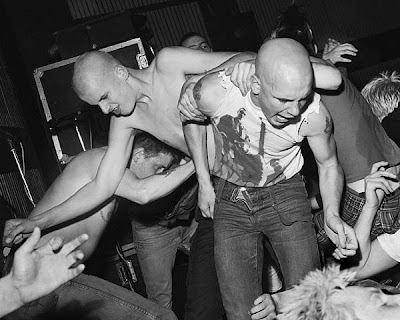 Chris Killip- Angelic Upstarts at a Miners’ Benefit Dance at the Barbary Coast Club, Sunderland, Wearside, 1984.
I've knocked this compilation together from a variety of sources- if there's one thing Oi wasn't about it was hi- fidelity!