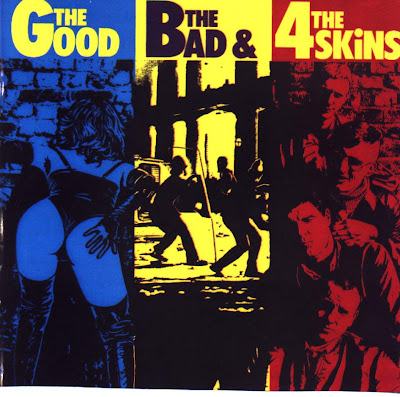 cCourt became a Skinhead at the age of 16, disillusioned with the commercialisation of punk. He also wanted a more stylish mode of dress. Hoxton Tom, as he was known to his mates in the West Ham ICF (he was Tottenham, so hanging out with Cas Pennant and the ICF seems like exceedingly dodgy behaviour), was a leading light in the Skinhead revival of 1977-1978, the Mod scene of 1978-1979 and the Oi! movement from 1979 to 1984. Unsurprisingly he then embraced the casual look.
Hoxton Tom was one of the founding members of the 4-Skins in 1979. Switching from guitar to bass he was an ever present in their many line up changes.
4 Skins are the archetype of the streetpunk Oi style - fast 3 chorders with rousing terrace chant choruses focusing on social injustice, class war and the good life.
This is a CD reissue of their first LP.