The 31st of May marks the 40th anniversary of the beginning of the 1970 World Cup, which culminated 3 weeks later with what many people consider to be the zenith of footballing excellence, Brazil's 4-1 victory over Italy.
To British TV viewers, though, the anniversary has another significance, for it is also the birthday of 'the panel' of pundits.
Like so many innovations in football in the second half of the twentieth century, the introduction of pundits was the brainchild of Jimmy Hill. Hill was the man that ITV turned to to give their football presentation that extra something that would give them the edge over the BBC.
Now at half time it was a case of back to the studio- and the 90 minute football match was expanded into a TV epic of predictions, analysis and post mortems.
Let's meet the panel:

Jimmy Hill- former Fulham and Brentford player, head of the PFA during their campaign to abolish the maximum wage. Hill manged Coventry City and in 1967 became Head of Sport at London Weekend Television.
I wanted men conceited enough to think that their opinion was the right one. I needed them to be articulate, knowledgeable and opinionated, but also to have personality. That's not the easiest combination to find- Hill interviewed by Brian Viner. 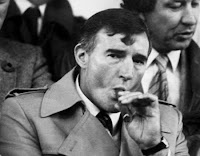 Malcolm Allison-Big Mal- former Charlton Athletic and West Ham centre half. In 1970 he was assistant manager of Manchester City. Big Mal was the outspoken member of the panel in glorious pre political correctness fashion.

Wolverhampton Wanderers centre forward and Northern Ireland international, The Doog was the eloquent, balanced member of the panel.

Patrick 'Paddy' Crerand of Manchester United and Scotland- the voice of the people.

Bob McNab.The 26 year old Arsenal defender's international career was already over (he made 4 appearances). Bob had to ring a bell in order that the other panellists would allow him to have his say.


The 1970 World Cup remains the only sporting event for which ITV's ratings have been higher than the BBC's in head-to-head competition. The panel inspired imitators- a televised football match today without punditry would be as unthinkable as an England triumph in a penalty shoot out.
For the next twenty years, though, punditry was pretty much limited to the TV studio, as England enjoyed a period of European club dominance, a World Cup drought (absent in 1974 and 1978), and the Golden Age of Hooliganism.
And then came the gentrification of football- the advent of The Premiership, the Fanzine boom, When Saturday Comes, England's heroic/ romantic endeavours at the 1990 World Cup. The early 90's seventies nostalgia boom. Suddenly everybody (politicians, actors, writers, artists, rock stars, academics- the very people who we knew in the 1970's and 80's had frowned on football and the culture associated with it; the sort of people who you just knew would never have dirtied their knees at playtime) claimed to have always been into football, everybody (see previous list) purported to support a team . And now, to prove their credentials, they began to talk like football pundits.
The media added to this via the emerging Lad Culture , creating an image of a regressive trainspotterish football obsessed male and an alternative sort of punditry emerged- not footballers talking about football but 'lads' talking about football. Danny Baker, Baddiel and Skinner, Simon O'Brien on Standing Room Only...
A special mention must be made of Paul Gascoigne's stint at ITV during the 2002 World Cup. The person who came up with the idea of using Gascoigne might have believed that being included on the panel would reveal some special and previously hidden qualities in a man (much loved) tormented by alcoholism and an affective disorder- or maybe they just thought Paul's good for a laugh. Gascoigne's main failing as a pundit was his inability to speak on camera, and it made cringeworthy viewing. At least Paul was in the studio - in 1986 the BBC hired George Best in a similar capacity- he never turned up.
Posted by Walker