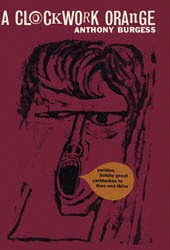 In 1961, convinced he was dying, the English author Anthony Burgess (1917-1993) wrote five novels in an attempt to guarantee a future income for his wife.
one of these books, which Burgess later described as being knocked off for money in three weeks, and largely ignored at the time, was A Clockwork Orange.
Various filmmakers (including Warhol) had toyed with the story during the 1960's.
In 1970 Burgess heard that Stanley Kubrick (1928-1999) was going to film the novel, news he received with some trepidation: I foresaw a dangerous situation for myself and I was right to do so...
Burgess and Kubrick, as befitted two geniuses, had an interesting relationship. 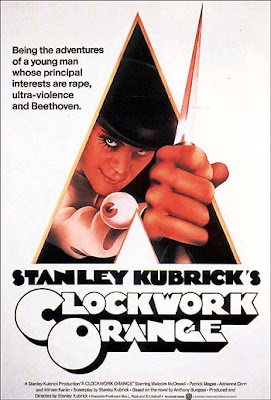 Burgess had earlier written a screenplay of the novel for a proposed adaptation to star The Rolling Stones. For the Kubrick production there was no screenplay per se; using the novel as a guide Kubrick had the actors improvise the scenes. Burgess (along with leading man Malcolm McDowell) resented Kubrick being credited with the screenplay. In terms of financial reward Burgess collected a relatively small sum from Warner's in an out of court settlement (whereas Warner's had paid the lawyer who owned the option on the novel $200,000). Burgess however, collected awards on behalf of the reclusive Kubrick, and worked with him on an unrealised Life of Napoleon.
Even though Burgess had no involvement in the film's production , the way in which its notoriety forced him into the spotlight obliged him to defend it.
Some elements of the novel are more disturbing than those of Kubrick's film. For example, in the book the gang members are only 14 years old. On the other hand Burgess' Alex (from the latin A Lex- without law) renounces the thrills of 'ultraviolence', whereas Kubrick worked from an American edition of the novel that lacked this final, redeeming chapter.
Amid the media hysteria in which crimes perpetrated by people who had never even seen the film were attributed to its influence, there was one event that stands out for special consideration. I've never seen it, but in what must have been a truly bizarre piece of television, the BBC asked Burgess to defend the film in front of an almost unanimously hostile audience. And who did the BBC choose to host this? Some expert on modern literature perhaps, or an eminent criminologist? Someone who was in a position to comment on the causal link between viewing or reading habits and maladaptive behaviour?
I'm not making this up. They chose (Sir) Jimmy Savile (OBE), the famous disc jockey. 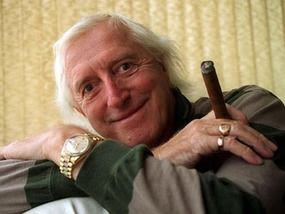 Burgess: Ow's about that then?

The scapegoat Burgess was not allowed to put his case across or to effectively challenge the views of the audience. He did manage to get in the great argument that if indeed there was a causal relationship between literature/ drama and violence then having seen or read Hamlet millions of people would have been incited to kill their uncles.
Burgess would comment years later: If they can give Jimmy Savile a knighthood, well, the honours system is so dishonoured that one wouldn’t want it.
For all the tribulations that the scandals surrounding the film caused Burgess he must have taken some comfort from the fact that when Penguin reissued the novel in the wake of the film's release it sold 50,000 copies in two weeks.
Horrorshow!

Further reading:
Stanley Kubrick; A Biography by John Baxter (1997).
You've Had Your Time, Being the Second Part of the Confessions of Anthony Burgess by Anthony Burgess (1990).