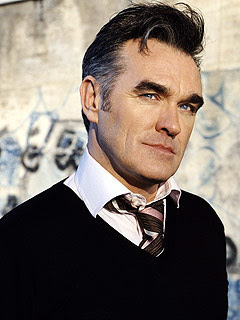 Sorry for the delay in bringing you this -

Okay nostalgia lovers, who remembers the heady days of November 2009 when the world was a better, safer place? We used to leave our door unlocked in them days...

For those of you who don’t know (i.e.- those who are not from Britain) Desert Island Discs is a long-running radio programme. It was first broadcast on 29 January 1942 .
Imagine that you are obsessed with pop music from a young age- it is your all consuming passion- you become an aficionado.You enjoy a successful 26 year music career in which your work is rich in pop culture references, all influences reverentially eulogised. Then at the age of fifty, after 45 years of obsessive pop fandom you are invited onto Desert Island Discs and have to choose eight records.
Eight.
Practically impossible.
When he appeared in November last year I thought that Morrissey might include: Sandie Shaw, Jobriath, some Rockabilly, Ludus, Patti Smith, Joni Mitchell.
Here’s what he did choose:
• New York Dolls - (There’s Gonna Be a) Showdown (overall choice)
• Marianne Faithfull - Come and Stay With Me
• Ramones - Loudmouth
• The Velvet Underground - The Black Angel’s Death Song
• Klaus Nomi - Der Nussbaum - The Walnut Tree
• Nico - I’m Not Saying
• Iggy & The Stooges - Your Pretty Face is Going to Hell
• Mott the Hoople - Sea Diver

Included here are the eight records in their entirity and the complete programme.
For a more comprehensive insight into Morrissey’s tastes and formative influences see the LP Under the Influence .