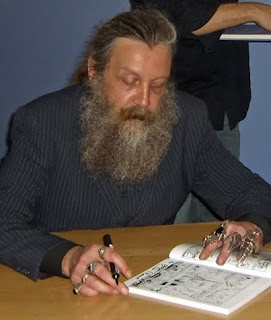 Alan Moore said: If we were to take out all the leaders tomorrow, and put them up against a wall and shoot them— and it’s a lovely thought, so let me just dwell on that for a moment before I dismiss it—but if we were to do that, society would probably collapse, because the majority of people have had thousands of years of being conditioned to depend upon leadership from a source outside themselves. That has become a crutch to an awful lot of people, and if you were to simply kick it away, then those people would simply fall over and take society with them. In order for any workable and realistic state of anarchy to be achieved, you will obviously have to educate people—and educate them massively—towards a state where they could actually take responsibility for their own actions and simultaneously be aware that they are acting in a wider group: that they must allow other people within that group to take responsibility for their own actions. Which on a small scale, as it works in families or in groups of friends, doesn’t seem to be that implausible, but it would take an awful lot of education to get people to think about living their lives in that way. And obviously, no government, no state, is ever going to educate people to the point where the state itself would become irrelevant. So if people are going to be educated to the point where they can take responsibility for their own laws and their own actions and become, to my mind, fully actualized human beings, then it will have to come from some source other than the state or government.

The whole of the interview can be found here.
Posted by Walker