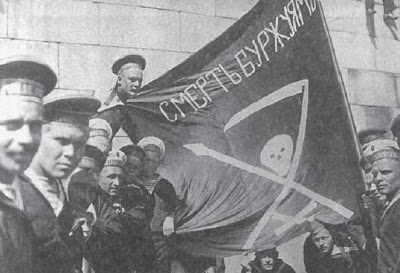 During the first quarter of the twentieth century the revolutionary zeal of the sailors of the Russian Fleet was impressive.
The Summer of 1905 saw the mutiny of the Black Sea Fleet, which provided the most enduring and evocative symbol of a year of great unrest (see Red Mutiny: The True Story Of The Battleship Potemkin Mutiny by Neal Bascomb. The 1925 film The Battleship Potemkin by Sergei Eisenstein gives a dramatized version of these events).

During the riots of the February Revolution of 1917, the sailors of the Baltic Fleet based at Kronstadt,30 kilometers west of Saint Petersburg, supported the workers and killed their officers.
The Kronstadt sailors pictured above are about to embark on a protest against the Provisional Government in June 1917.
Later their role in the Great October Revolution would also be significant, providing the Bolsheviks with military muscle and an enduring symbol of October in the actions of the cruiser Aurora, but ultimately their disillusionment with the Bolshevik system would lead to a further revolt their destruction at the hands of Trotsky's Red Army in March 1921.
Whilst the artistry in the flag is rudimentary the message is clear- Death to the Bourgeoisie.
Posted by Walker