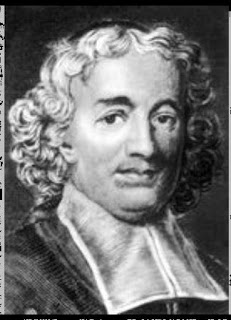 How I suffered when I had to preach to you those pious lies that I detest in my heart. Meslier
Every honest man should have Meslier's Testament in his pocket. Voltaire
Jean Meslier (1664-1729) was a Catholic priest from the Ardennes. Upon his death it was discovered that he had written a book promoting atheism and denouncing religion, which he described  as his Testament to his parishioners. Organized religion, stated Meslier, was but a castle in the air.
Meslier also advocated a rural proto-communism, based on common ownership and mutual cooperation between autonomous communities.
Most prominent among the writers who produced their own (illicit) adaptations of Meslier's lengthy and literally cumbersome work was Voltaire, whose Extraits des sentiments de Jean Meslier (1762), whilst bringing Meslier into the public eye, also did him something of a disservice: Voltaire's book presented Meslier as a deist (like Voltaire himself) rather than an atheist.

Colin Brewer's 2007 article in The New Humanist is well worth a read:


Historians argue about who was the first overt, post-Classical atheist but Meslier was arguably the first to put his name to an incontrovertibly atheist document. That this important event is largely unrecognised  is due partly to Voltaire who published a grossly distorted “Extract” that portrayed Meslier as a fellow-deist and entirely suppressed Meslier’s anti-monarchist, proto-communist opinions.

Diderot's  famous And [with] the guts of the last priest let's strangle the neck of the last king (from Dithrambe sur Féte des Rois- c1780) is drawn directly from Meslier's man who ...wished that all the great men in the world and all the nobility could be hanged, and strangled with the guts of the priests.
This sentiment, Meslier held, was motivated by the  love of justice and truth. 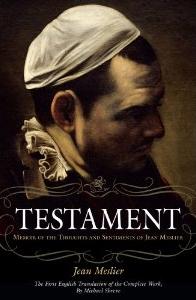 Voltaire's take on Meslier can be found here.

An English translation of  Testament is available.