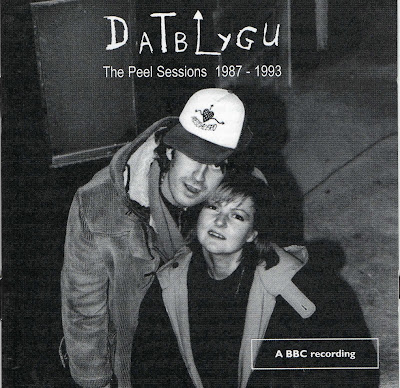 If you know anything at all about Datblygu you'll know about the late John Peel's passion for them, and the exalted position that they hold in Welsh language music. For a group who performed solely in Welsh to record five sessions for JP was a truly remarkable achievement. David R Edwards is still (rightly) regarded as an icon of popular culture and consciousness in Wales.
Dave once told me that he had never seen a penny from the BBC releases. I had the good fortune to see him again not long back, and it's always refreshing to meet such a talented and culturally significant bloke and to realise what a sound and down to earth person he is.
It's somehow in  keeping with Datblygu's rather anarchic background
that a retrospective exhibition, Datblygu Trideg, celebrating thirty years since their formation, has been held in a waffle cafe.


There's a Datblygu website (in Welsh)  here...
And you can read about the waffle cafe exhibition here (in English) and here (in Welsh).

I've included a scan of the inner sleeve. It includes details of the personnel , producers, dates etc, but more interestingly Dave's notes on each song featured. (In English):   http://d01.megashares.com/dl/K2hT9gx/datblygu notes.rar

And while we're at it, isn't it about time that somebody translated Dave's autobiography,  Atgofion Hen Wanc into English?
Posted by Walker