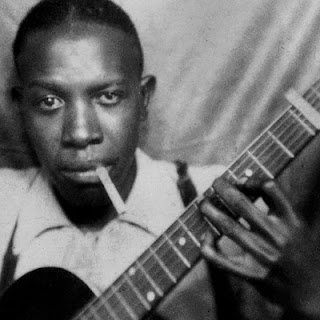 May the 8th is possibly the centenary of the birth of Robert Johnson. He was an itinerant musician who died at the age of 27 and recorded less than 30 sides. His influence on Blues and consequently rock and roll is difficult to express without recourse to lazy superlatives. This, largely, was thanks to the release of King of the Delta Blues Singers in 1961.
There is a theory that these recordings were 'speeded up' .
The evidence on which this is based and examples of slowed down versions  can be found here.
The Search for Robert Johnson (1991) is a good watch. It's on YouTube.
Posted by Walker