There were black footballers in the seventies. More than I remembered in fact, as I discovered when looking for information for this post.
But they were still such a minority as to be considered a novelty.
West Bromwich Albion were thought noteworthy in that they had 3 black regulars in the first team, and manager Ron Atkinson (enmired in a racial slur controversy some 25 years later), was, according to Brendon Baston, very supportive of the 'coloured players', which didn't prevent him from labelling them The Three Degrees. 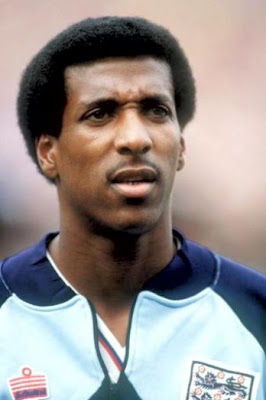 But this picture comes from another age- the age of monkey noises on the terraces and bananas thrown onto the pitch.It's May 1979, and West Bromwich Albion's Len Cantello has a testimonial at The Hawthorns. Len Cantello's XI take on what is now referred to as a Cyrille Regis and Laurie Cunningham XI, although at the time it was billed as a Black XI. 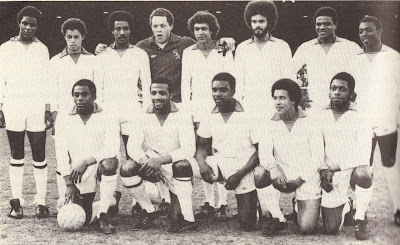