The Business- The Complete Singles Collection 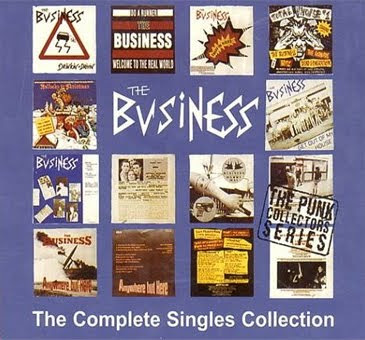 The Oi! movement arose when, according to The Business guitarist Steve Kent, the punk scene became infested with trendy university people using long words, trying to be artistic...and losing touch.
Anything that has to defend itself against charges of fascism is usually on dodgy ground to start with. Perhaps honest to goodness 'British working class culture' is by its very nature violent and racist? The thing about Oi! was that it was dumbed down enough to appeal to the sort of kids who kicked peoples heads in for a laugh, and groups like the NF saw the scene (along with the football terraces) as a well stocked recruiting ground.

A more generous analysis might be that Oi! was a fine example of the mobilized proletariat having the trendy left ( ie: Steve's trendy university people) throw up their hands in despair. I've got vivid memories of being chased by a baying crowd of skins in 14 holers and I must say that it was exhilarating. Getting pissed and fighting: cheap, accessible adventure sports for young have nots. And a raucous soundtrack makes it even more enjoyable.
One final observation- Gary Bushell was a cunt.