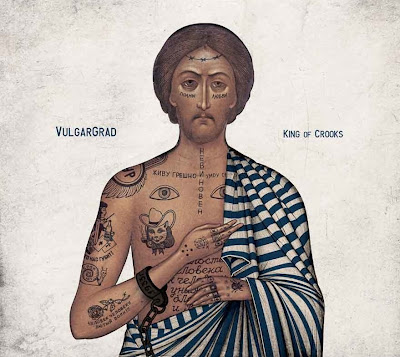 VulgarGrad are a curious band. Australian, and fronted by Polish born actor Jacek Koman, who has appeared in such films as Moulin Rouge and Australia. They perform songs 'of the Rusian underworld'- traditional songs made famous by artists such as Vladimir Vysotsky (1938-1980)  and Arkady Severny (1939-1980), along with compositions by these greats. They also cover songs by the phenomenal Sergei Shnurov of Leningrad and other Russian punk classics.

I've done my best to identify the origins of the tracks featured on this album - feel free to correct / expand my efforts.

1. Oy Oy Oy - traditional song.
2. If I Were a Sultan- a song from the classic  Soviet comedy Kidnapping Caucasian Style - The New Adventures of Shurik (1967), sung by comedy great Yuri Nikulin.


3. The Party on Horse-Shit Street - traditional song.
4. Super Good- by Sergei Shnurov (Shnur) from Leningrad's 2003 LP The Second Magadan.
5. Natural Born Thief [Gop-So-Smykom]- a traditional Odessa criminal folksong often sung by Arkady Severny.
6. Bolshoi Karetny- a Vladimir Vysotsky song about a street in Moscow.
7 Stop the Train! - traditional song.
8. I'm Your Cowboy - by Sergei Shnurov (Shnur) from Leningrad's 1999 lp Mat bez elektrichestva.
9. Odessa Jailbreak - written by Kelman &Timofeyev- this is a  standard of the Russian underground recorded by Arkady Severny-  it can be found as early as 1926 in the movie The Career of Spirska Shpandyr- sung by Soviet Jazz master  Leonid Utyosov.

10. Junky, Alcoholic and Drunkard (These Are Such Undignified Words)- traditional song.
11. Black Flag- a cover of a number by Va-Bank , a Moscow Punk band formed in 1986.
12. A Piss-Up Begins with a Bottle (Plyatskovksy, Severny, Shainsky) Arkady Severny again.
13. Zhopa  'Arsehole'- another Leningrad number by Shnur.
14. Cigarette written by some geezer called Krupp and made popular by Arkady Severny.
15.Tram No. 10- traditional song
16. Odessa Jailbreak (slow version) see above.