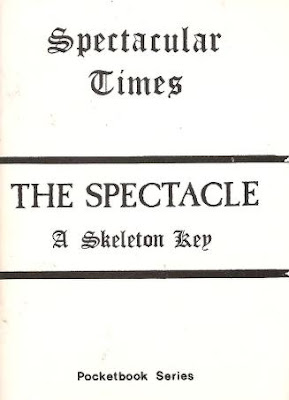 With the egocentricity of youth- when I was about 17 - I thought that I'd practically invented anarchism, and with a narcissistic smugness I'd go on about it to anyone who'd listen. To be honest about it I wasn't looking for kindred spirits or sympathetic ears, I wanted the outraged responses of the ordinary Joes.
Then, when I started college I met a lot of old heads from the sixties who had seen it all before. In 1983 1968 seemed to me an impossibly long time ago, but to these guys it was just the other day.
So I came to be aware of The Situationists, and stuff like this.
I don't know much about Larry Law ('writer, publisher and anarchist'). I do know that his series of 'pocket-books' Spectacular Times was started on April 1st 1979, with the aim of assimilating Situationist ideas (so often steeped in obfuscation) into the anarchist movement. The title is a reference to Guy Debord's Society of the Spectacle.
Larry Law died on July 22nd 1988.

Copies of Spectacular Times are available to read online here...