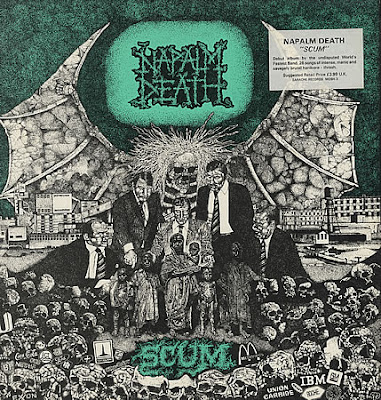 Back in the early 80's I remember Discharge getting a slating in one of the righteous music weeklies because 'three lines doesn't make a song'.  Emerging from the hardcore/ anarcho punk scene Napalm Death took the blast beat/ noise element of the music to its logical conclusion and pioneered the 'microsong'. These minimalist numbers made Discharge's efforts seem like sprawling prog rock epics.  This album includes their greatest song- You Suffer... But Why?
Drummer Mick Harris recalls the bemusement of early audiences who weren't sure if they were   'serious' band or a wind up.